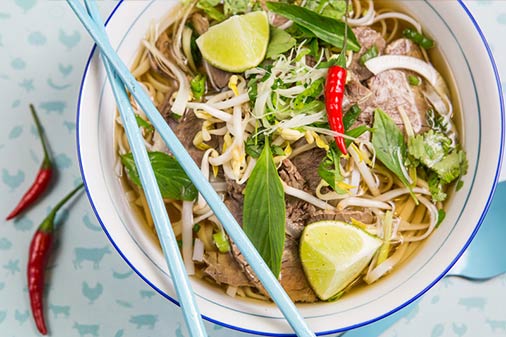 Pho is the national food of Vietnam as well as the flagship dish of Funky Pho, so let’s just spend a bit of time on the topic. The savory stock is cooked slowly for six hours with ginger, star anise, and cassia amongst other ingredients. Besides the PHOtastic stock, your bowl is filled with yummy rice noodles, the meat topping of your choice and loads of veggies and Asian herbs. Now it already tastes great, but a splash of lime balances out the sweet and the sour nicely. Our kick-ass chili paste is on the counter so that you can spice it up a bit. Our special carrot pickle goes so well with the soup that it’s provided free of charge with each bowl. No wonder that our pho has won Gault & Millau’s Street Food of the Year 2014 and Dining Guide’s Top Pho of 2014 awards simply call it “fuh”; to say it correctly, you’d need to see a music teacher.

What are your meat topping choices?

As the stock is cooked from beef, the meat options you can choose from are also beef cuts. Upon request we can substitute beef with chicken or tofu though.
Shank: cooked in the stock for at least six hours. So tender that it just melts in your mouth. During these long hours of cooking beautiful friendships are formed to the benefit of both parties: the stock gets a deep meaty taste while the shank gets infused by all the spices of the stock. Hurray.
Ginger Tripe and Calves’ Feet: in Vietnam these guys really go crazy for the meat cuts with interesting textures as well as for intestines. This insight has motivated Andras when he started to brainstorm with Chef Tibi about a meat topping of such kind.
The tripe is cooked al dente so that it holds on to some of its crispiness and then it’s marinated with ginger. The calves’ feet are slowly cooked in the stock for long hours. This is to the benefit of both the claves’ feet and the stock. When all cooked, it’s nicely formed, cooled down and cut into robust slices. Thus you’ll find in your bowl playful textures supercharged with a splash of ginger.
Vietnamese Beef Tartare: ground beef with exotic spices. Tastes very different from the above two and it’s also a different experience to consume due to its different shape. A real Funky Pho specialty, not to be found at other pho places in town. The recipe comes from a back alley pho shop of Hanoi, neighboring the Ho Chi Minh mausoleum.
Sirloin: this premium meat gets a premium treatment. First it’s cut very thin, then soaked in a fish sauce-black peppers-ginger marinade and flushed with piping hot stock when being served. It’s cooked in a second while holding on to its deep meaty taste. As an extra bonus, thanks to the marinade, it gets super tender and savory.

How to eat pho like you know what you’re doing?

When you get your bowl of pho, you hardly see anything from the herbs and vegetables on top. That’s the way it is. Do not forget to mix it after all. Then squeeze in some lime juice, mix again and taste. If it is right for you then go on, eat it up! If you need more, try to spice it up with our carrot pickle, our home made chili paste, fresh chili, chili-garlic pickle, fish sauce or the famous Sriracha. Grab a spoon, chopsticks (or fork) and don’t wait until it gets cold, the hotter the soup, the better it tastes.

What does it take for a bowl of pho to be authentic?

Let’s see some history to start with as this will help to understand Pho. Generally speaking, noodle soup dishes form the basis of the culinary world all over Asia for hundreds of years. However pho itself looks back only roughly to 150 years of history.
The recipe was born during the French colonization era, with the vast contribution of the colonizers themselves. Before that time beef was not really consumed in Vietnam, as cattle (water buffalo) was too valuable of a livestock just to eat. Not for the noblemen from Europe. As the legend goes the Vietnamese staff serving their European lords were too regretful to simply throw away the bones and other remains from the nice steak cuts and also learned how to cook the stock for soup. They started to cook pho v0.1 on the basis of the French bouillon recipe with a twist: they accompanied it with local spices, rice noodles and loads of herbs. At least in the South. Up in the North, around Hanoi they use less herbs as these are less available in the colder climate. We decided to follow the Southern way due to our personal taste: our pho is sweeter, spicier and accompanied with more greens than at other, mostly North-Vietnamese places in town.
You might ask how on Earth we could be authentic if we have no Vietnamese on staff. It comes down to only one thing: determination. For example Tokyo’s best ramen is cooked by a „Jewish kid from Long Island”. Of course to understand Asian cuisines it takes a lot more effort than to understand a European one. Eva, Co-Owner and Creative Chef of Funky Pho after having spent a year and half in Asia went back and travelled all across Vietnam to further polish her cooking skills at the best cooking schools available.
Moreover we use a pho recipe that dates back to the time before MSG set its strongholds in the Asian kitchens. This additive is to be found in its natural form in a number of foods, e.g. in fish sauce. In Vietnam it’s gained its popularity during the years of hardship when food was scarce but you still needed to put something with a taste on the family table. For the following generations it became a routine move to put MSG in whatever they cooked. It makes cooking quicker and easier. This is why Asian restaurants like to use it a lot. If, however you use quality ingredients and take your time, it’s perfectly unnecessary to grab for MSG. At least this is what we believe. Also, it gives Eva a terrible headache. In its own, this would be enough reason for us to skip MSG. We use natural ingredients only to cook up all these beautiful flavors.